Log In • Sign Up
Follow us on
Go to official site
Go to official site
Home › Bugs and Glitches
Log In • Sign Up
Check out the P.E.T. Part 2 preview site: http://mabinogi.nexon.net/micro-site/pet/part2
Check out the patch notes for the July 16th update, P.E.T. Part 1: http://forums.mabinogi.nexon.net/discussion/23332/
[NEW MILLETIANS] Please note that all new forum users have to be approved before posting. This process can take up to 24 hours, and we appreciate your patience.
If this is your first visit, be sure to check out the Nexon Forums Code of Conduct. You have to register before you can post, so you can log in or create a forum name above to proceed. Thank you for your visit!

Mabinogi Rep: 200
Posts: 8
Member
July 10 in Bugs and Glitches
I have observed memory activity for quite some time and now I am pretty sure that Mabinogi is the culprit here.

I have 8 gb of memory on windows 7, so I'm still fine to play it for quite some time, but for those who have less its even worse.

here's some proof after playing for awhile and then turning everything off theres a leftover of 2gb memory leaked. 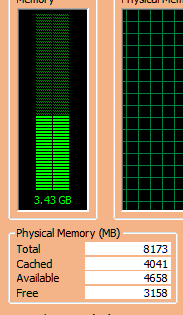 I can clean standby memory just fine, but not the modified which was leaked by the game