Log In • Sign Up
Follow us on
Go to official site
Go to official site
Home › Bugs and Glitches
Log In • Sign Up
Check out all of the details of this month's Patch Notes, featuring the Renovation Season 3 Update! https://mabinogi.nexon.net/news/74541/renovation-season-3-patch-notes-may-26th-2022
[NEW MILLETIANS] Please note that all new forum users have to be approved before posting. This process can take up to 24 hours, and we appreciate your patience.
If this is your first visit, be sure to check out the Nexon Forums Code of Conduct. You have to register before you can post, so you can log in or create a forum name above to proceed. Thank you for your visit!

Mabinogi Rep: 2,590
Posts: 118
Member
December 10, 2018 in Bugs and Glitches
What happens now: The movement speed set name for Abyss/Saint/Wings is the same as Fleet Feet.
What should happen instead: The set name for the Fleet Feet effect should be renamed.

Items like the Saint Guardian's Leather Armor (F) and the Abyss Dragon Armor (F) both have "Increases Movement Speed" as the name for the set effect they use (SpeedUpPlus set at 1% for those).
Saint guardian... 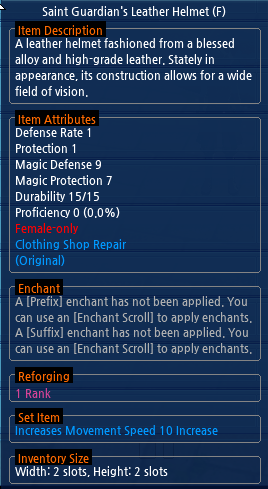 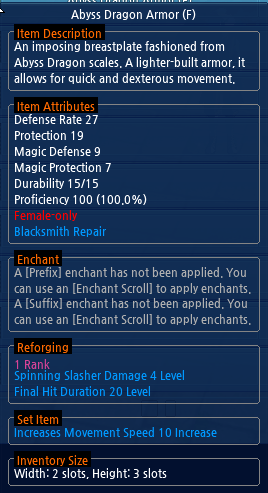 A number of other items, like the wings from Festia, use this set effect too (with a bonus anywhere from 1-3%) and thus share the same name (and there's likely to be more items like this if the trend continues). It's all the same set effect and doesn't stack with itself (since getting more than 10 points of a set doesn't do anything in Mabi), and it should easy to see that this is so because they all use the same set name in-game.

However... there's a second type of move speed bonus with the same name. Fleet Feet and Shooting Star Flying Shoes also display "Increases Movement Speed" for their set name, but they actually have a different set effect (OverlapSpeedUp) that's stronger (~10% or so). Since it's actually a different effect, Fleet Feet would stack with the Abyss body slot effect, for example, but since they share the same name players might not know that.
Fleet... 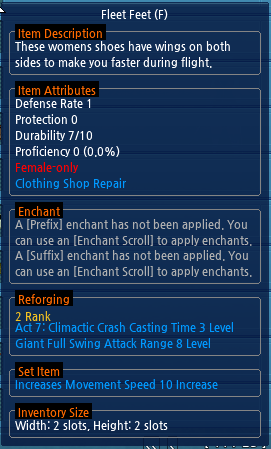 One of these set effects should be renamed to clear up at least a little confusion.

I personally suggest renaming the text that the shoes use since you could take the opportunity to name it something like "Fast Running" or "Zip Zoomy Feet Go Woosh" or whatever to stay thematic, but renaming the effect that other things use would work as well.