Log In • Sign Up
Follow us on
Go to official site
Go to official site
Home › Story Discussion
Log In • Sign Up
Check out all of the details of this month's Patch Notes, featuring the Great Era of Commerce Part 2 Update! https://mabinogi.nexon.net/news/75598/great-era-of-commerce-part-2-patch-notes-july-28th
[NEW MILLETIANS] Please note that all new forum users have to be approved before posting. This process can take up to 24 hours, and we appreciate your patience.
If this is your first visit, be sure to check out the Nexon Forums Code of Conduct. You have to register before you can post, so you can log in or create a forum name above to proceed. Thank you for your visit! 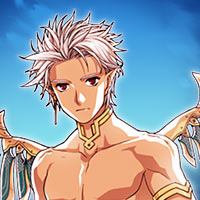 Mabinogi Rep: 300
Posts: 4
Member
January 13, 2019 in Story Discussion
Balor? I also just noticed that Balor has his left eye glowing and vayne has his left eye covered. And I remember from his flashback I was wondering why there was only dead human, and human ghost/spirit? At first I thought maybe he was an mercenary who likes to hang around battlefield to fight left over people who were strong enough to survive, but then the final spirit ghost shows up and reminded me of a champion. So the champion would be lugh and the person I'm rping as would be Balor? So is Vayne friend that he trying to look for is Lugh, maybe? Because he feels robbed that the gods stole his fated fight from him by intervening, and now he's obsessed with trying to find lugh or a replacement of someone strong enough to give a fight so he could reenact the war from back then, but this time without the gods intervening? That's why he's helping us and teaching us how to use briough so that we could be a better challenge for him later on? Somewhat reminds me of when Darth Maul was obsessed with Obi-Wan and was hunting him down.

P.S: I am currently only at the part where piran was told about his little sister kidnapping. I hope nothing happens to her, because from what I remember most of the little girls and boy in mabinogi generation story don't have a happy ending. :c