Mabinogi Rep: 1,080
Posts: 39
Member
December 23, 2018 in Feedback and Suggestions
Back in the day, playing around in the arena was so much fun, but it was never rewarding. And because of that players rarely touch it. why not buff it and add rewards for people who take it seriously? here are some things you could do:

1.Stars are no longer traded for coins, they are instead a unique currency called "arena points" or something. after you survive a round in the arena, your stars are converted into Arena Points. the arena NPC will have a tab in their shop where they sell cool stuff for arena points

. arena coins should probably increase in price to reflect the value of the NPCs potential rewards.

2.Balance the damage and skill usage of players: "Standard" pvp has rules created by the small community of pvpers. generally, duels are at 1-2% damage, so all players in the arena should have their damage reduced to about that, maybe a bit higher because arenas are supposed to be fast paced will multiple kills and respawns. just not so outlandish that people get 1shot into deadly. also:
-potions should be disabled
-transformation should be disabled
-mana shield, while usually banned in duels, would probably be okay if the damage % is high enough.
-major cooldowns, like windguard, final hit, final shot, golden time(?) should either be disabled OR have their cooldown increased to once per round, and duration reduced.
-other abilities that are easily spammed can also have their cooldown increased or be disabled. I don't know how easy it is to edit this stuff within the game, but this is gonna take constant balancing and tuning over time.

3.Prevent win trading and farming by having all the arenas have random matchmaking. when you enter the arena, it monitors the amount of people in the arena in each channel, and moves you to one accordingly. that way there is an even spread of players between each channel.

4.Alby, Connous, and Rabbie can all have separate rulesets and rewards.
Alby is classic free-for-all.
Rabbie is like a 1v1 mode. if you want to keep the transformation theme, then go for it.
Connous is parties of 2v2 or 3v3 vs eachother. Connous arena is actually really cool as it is in game right now, because it allows party duels. But you could already do party duels outside of the arena in the EU version of mabinogi: 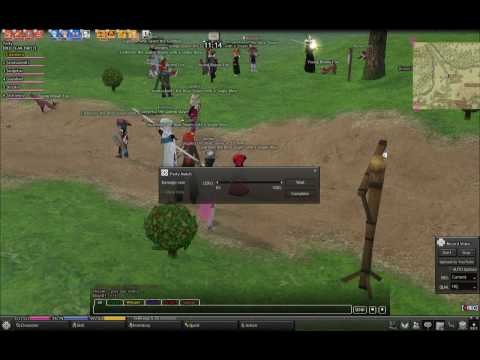 so if you convert connous arena into this rated pvp idea, you can just add party duels to NA as a replacement.

PVP in mabinogi is so interesting and unique that it deserves a bit more love. I would love to see more people get into the pvp community, but outside of community run tournaments there is no incentive to fight eachother. Hope something can be done in the future to make pvp more rewarding and bring more life to it