Log In • Sign Up
Follow us on
Go to official site
Go to official site
Home › General Chat
Log In • Sign Up
Check out the patch notes for update, A Fresh Memory: https://mabinogi.nexon.net/news/66877/a-fresh-memory-patch-notes-may-13-2021
[NEW MILLETIANS] Please note that all new forum users have to be approved before posting. This process can take up to 24 hours, and we appreciate your patience.
If this is your first visit, be sure to check out the Nexon Forums Code of Conduct. You have to register before you can post, so you can log in or create a forum name above to proceed. Thank you for your visit!

Mabinogi Rep: 7,170
Posts: 901
Member
June 8, 2019 edited June 8, 2019 in General Chat
I thought I would publish the list of Seal Stone breakers that I compiled for the Nao server. I included the stone broken, character name, character race, and server origin in order of Seal Stone appearance (Largely in order of both when the original Seal Stone came out followed by when you typically encounter it in the game). I would like to congratulate those lucky enough to break a stone and would love to hear any stories about those who were there (either breakers or people who attempted a stone or multiple stones). I'll also publish a text list at the bottom for text searching. 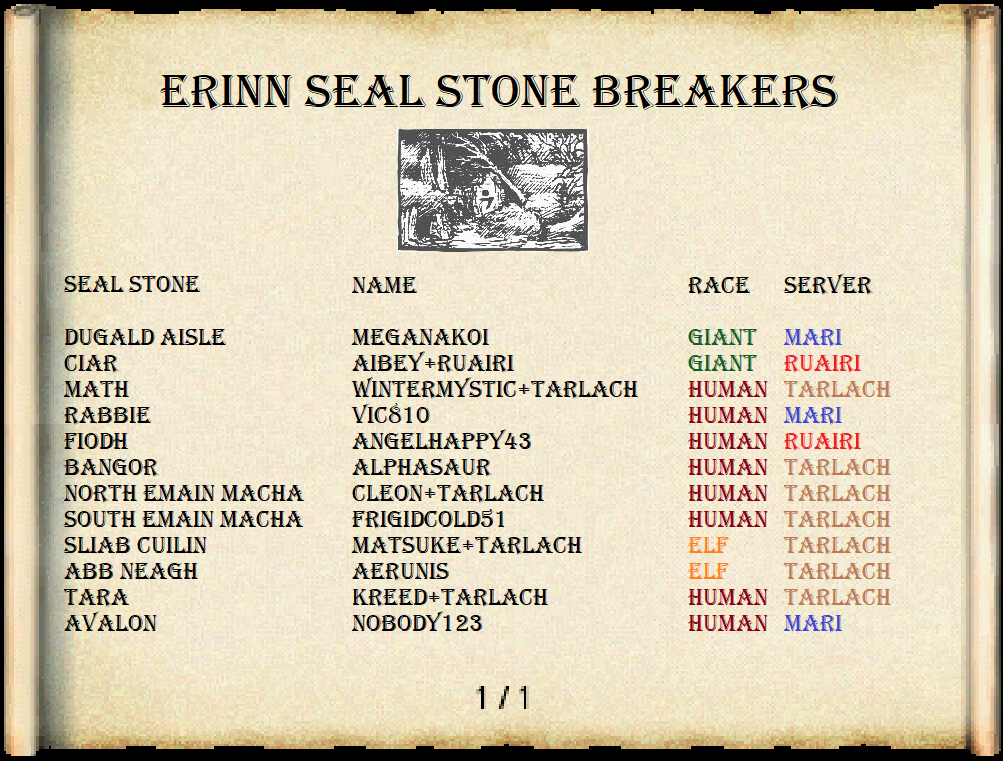 I sincerely apologize if I got anyone's name or information wrong; most people I researched with searches and a few I had to ask directly. I'll amend the text version if there are any inaccuracies because lazy.


Personally, I was very surprised by the dominance of Tarlach players and Humans. I thought it would be slightly more balanced but it's such a tiny sample size of actual population that anything could've happened really.