Log In • Sign Up
Follow us on
Go to official site
Go to official site
Home › General Chat
Log In • Sign Up
Check out all of the details of this month's Patch Notes, featuring the Crom Bás Part 2 update!
https://mabinogi.nexon.net/news/71292/crom-b-s-unveiled-abyss-part-2-patch-notes-january-13th-2022
[NEW MILLETIANS] Please note that all new forum users have to be approved before posting. This process can take up to 24 hours, and we appreciate your patience.
If this is your first visit, be sure to check out the Nexon Forums Code of Conduct. You have to register before you can post, so you can log in or create a forum name above to proceed. Thank you for your visit!
«12345»

Mabinogi Rep: 6,770
Posts: 443
Member
February 28, 2020 in General Chat
So, I finally got around to purchasing a name change coupon, but can't say I'm entirely pleased with the way it was handled/implemented, especially considering what names are deemed "offensive" and which are allowed.

Ever since the topic of name changes became a thing around here, I've wanted to change my name to "Zenith", because I'm not a particularly big fan of my current name made back in 2013 when I was barely out of middle school. I'd check the mailbox in game to verify the name was even available after over 10 years of this game operating, and to my surprise, it was: 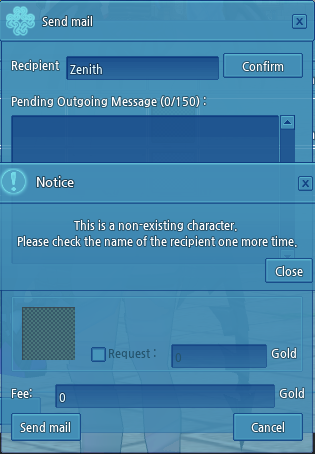 However, the day I attempted to verify the name, I was met with "Offense language or words are not allowed"-- well, that's quite strange, isn't it? The word "Zenith", for any unaware, is defined as either: 1. "the time at which something is most powerful or successful", or 2. "the point in the sky or celestial sphere directly above an observer". Perhaps there's something I'm missing, but nothing here reads to me as especially offensive, unless Nexon representatives are adamantly fearful of things in the sky.

Naturally, I opened a ticket to see what the fuss was about, however I'm now going onto day 4 of it being open, and the most I've been told is either something I had already informed them of, and a statement saying they have confirmed the name is not offensive, but that the message is saying it is, thus I am SOL. I asked if the 10,000 NX could be placed back into my account and the name change coupon removed (not even a full refund, mind you, I'd still be using the $10 I paid without having received a service) and was told I could not. Interesting, to say the least, but this gave me an idea.

What names are censored, and which are not? Alternatives to "Zenith" are present in the game. "Zenithe" and "Zenyth" are options currently in use. Perhaps the biggest kicker, the word "Zenith" itself is used in a Technique-related quest in-game. Yet, names that are blatant filter-dodges and contain EXPLICIT and ACTUALLY OFFENSIVE words are deemed "Available" for use. Obviously, I cannot repeat them here, but I'd imagine there's a clear picture there. Actual offensive language is allowed, while a completely innocent word is not. I've also heard that the name "Rose" is considered offensive as well, for some... strange reason. It's important to note that these words can be sent in game without being defaulted to ***.

I was very much anticipating paid name changes, and I'm glad that people are able to use the system to fix names that they no longer like. However, I cannot for the life of me understand why, for some people, names that are completely innocent are deemed offensive; names that are perhaps the only ones they are interested in and/or contain a similar root of their current name to maintain a previous identity.

If anyone else has had names they were interested in kept away from them unnecessarily due to "offensive language", please share below. I am very smol grumpy blue bean who just wanted a new name and they won't even just give me my 10,000 NX back to spend on pon/gacha or something, idk.