Log In • Sign Up
Follow us on
Go to official site
Go to official site
Home › European Chat › Mari Chat
Log In • Sign Up
Check out the patch notes for the February 18th update: https://mabinogi.nexon.net/news/65163/patch-notes-february-18th-2021
[NEW MILLETIANS] Please note that all new forum users have to be approved before posting. This process can take up to 24 hours, and we appreciate your patience.
If this is your first visit, be sure to check out the Nexon Forums Code of Conduct. You have to register before you can post, so you can log in or create a forum name above to proceed. Thank you for your visit!

Mabinogi Rep: 540
Posts: 6
Member
September 6, 2018 in Mari Chat
Hiyo, I currently returned..again.. to Mabi(the last time I played was 2 or 3 halloweens ago, iirc. Before that off and on over the years since it went gold(didn't quite get into the beta, only found out about it shortly after it ended).

I'm looking for peeps to play with/chat with/etc. Mabi really is more of a social game to me at times, plus I wouldn't mind finding some people to do parties with while I play. I'm looking to slowly work my way up the Generation quests, i'm on G7(Yes, I know, i could skip it, but I want to read the story/do the cutscenes..and who could resist running around as Ruwai??), currently stuck at Taune's Request. From there I want to do G8 and work up.

I do frequently check the Mabi wiki, so I can be pretty self-sufficient in regards to information I need to get, though I don't always do my research enough, lol.

I don't intend to leave my old guild though, largely cause even though its Dead, I lose access to a lot of old friends homesteads that have been fueling some of my crafting skills and such. I suppose if I stick around, I might eventually change my mind.

One of my biggest problems is the hours I can usually play the game at. They're limited to Overnight Hours(Central Time, UTC -6) 2 nights of the week(Sunday Night and Monday Night), and then either from 6:30am till 8:30am/9:30am till I sleep. It really can get boring just playing on my own, and everyone just seems AFK 95% of the time unless I go to an event, but they all disappear soon as events are over usually, or go back to afk till the next time for the event.

I currently have Returned Status for 7 more days(and only on quest 5 for it, cause I didn't want to rebirth right away cause I had JUST rebirthed not that long before I got the title).

My current Cumulative Level is 459, and i'll post a screenshot of my stats, but i've got too many skills to currently list(Mostly Combat/Dual Gun/Chain Slash as those are mostly what I did over the years, limited crafting, since when I started it was cheaper to buy 1 new character to be your combat/item hunter and have the other be your crafter instead of paying to constantly rebirth).

My IGN's are Lilreena (Main, Combat), Calreena (Secondary, Was doing Tailoring, not sure why), and a Giant and Elf I got for free that I basically use for extra storage, lol. 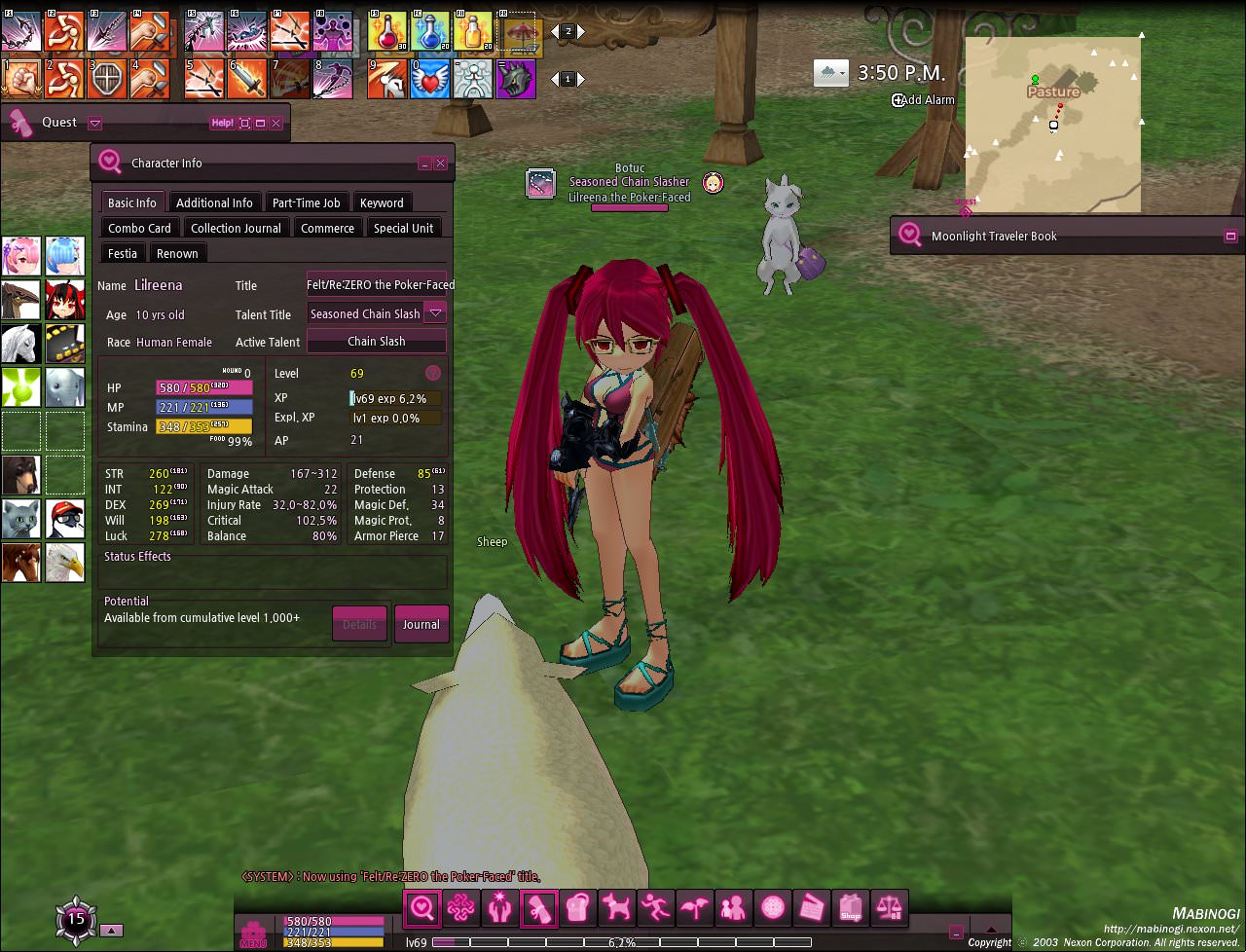 To Give an idea how old my account is, my kitty cat I bought(i think it was near/around when I first played or w/in a month, cause I needed it's storage), is 534 years past the age of 25. I have some pets around 280 years past 25, a few that are ~150 years past age 25. My Elf and Giant are both around 2000 days since last rebirth(they've never been rebirthed).

Annnywwwwaaayys.. I think thats enough yammering for now, thanks!