Log In • Sign Up
Follow us on
Go to official site
Go to official site
Home › Feedback and Suggestions
Log In • Sign Up
Check out all of the details of this month's Patch Notes, featuring the Crom Bás Part 2 update!
https://mabinogi.nexon.net/news/71292/crom-b-s-unveiled-abyss-part-2-patch-notes-january-13th-2022
[NEW MILLETIANS] Please note that all new forum users have to be approved before posting. This process can take up to 24 hours, and we appreciate your patience.
If this is your first visit, be sure to check out the Nexon Forums Code of Conduct. You have to register before you can post, so you can log in or create a forum name above to proceed. Thank you for your visit!
Closed 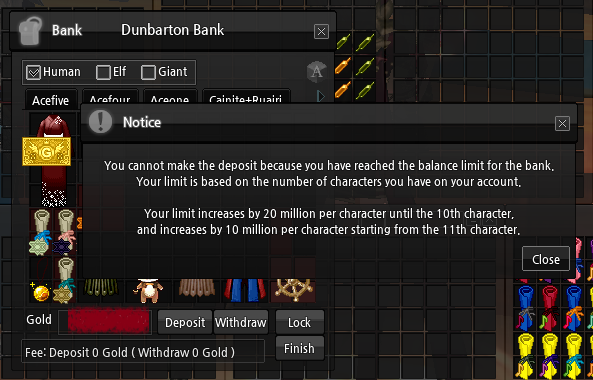 This is an ongoing annoyance that I run into from time to time. I mean, just let me do what the hell I want. What if there is something for 1b that I wanna buy but the seller is MIA and I don't want to wait and get screwed over with greedy troll offers? Seriously, every time I put up an ad or want to buy something and people know they double the freaking price. (Especially if they know it's me). I should just be able to buy whatever the hell I want without checks. I should be able to store WAY more gold without having to buy another character card - which IMO to only store another 10m is a RIP OFF in today's in-game economy.

I propose that the bank storage limits be DOUBLED from their present limits. 40m per character for the first 10 characters and then 20m per character after that. I got enough pets and characters overloading my screen everyday. I don't want to buy more character cards just so I can store a LITTLE more gold. Gold limits should of been way more than what they are ever since the auction house update.

Please increase the bank limits NA, for the sake of anonymity and fair market. Thank you.